We began the night’s meeting by revisiting our three options for our final project. The three options were Theatre, Sports Museum, or a Low-rise Mixed-use building. Students broke up into the same groups from last week to finalize their “discussion” points. They had to come up with pros for the project they were representing and cons for the other two.

Each team had a few minutes to say why their project was the best. Then the other two teams could ask questions and get clarification. The discussion got heated quickly! There was definitely not one clear winner. Then it was time to vote! But a TWIST! Students were not allowed to vote for the project they were representing. We will find out the results next week!

After the voting, we began on a construction activity. Groups had to build a bridge structure that had certain size and weight requirements in a set amount of time and on a budget. After a 10-minute “permitting” (read: planning) process, teams had to purchase all of their materials. Materials included wooden skewers, toothpicks, note cards, tape, and a few other items. 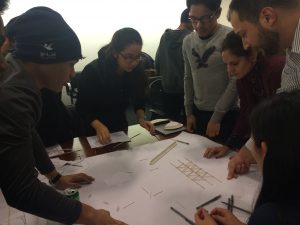 Teams had about 20 minutes to build. There were other limitations put in place that were meant to mimic the actual construction process. For instance, if a team purchased 5 skewers, they could only get one per minute after time started. This represents procurement time for a material, like steel. Another limitation was the use of the hot glue gun. In order to use it, you had to sign up for a time slot in advance, but there were only 2 glue guns for 4 teams!

It was definitely a challenge, but all the teams did a great job. Some teams took penalties for not meeting all the requirements, but everyone learned a lot! 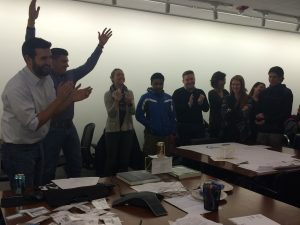 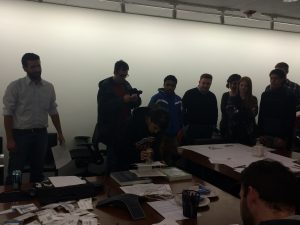 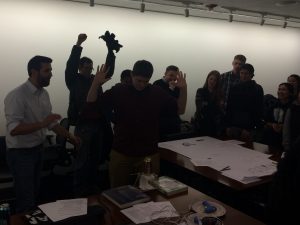