For Week 3, we focused in on each discipline individually. After dinner, each of the three mentor companies presented on some of their recent projects.

First up was Jacobs, the engineering mentor firm. They shared a presentation that detailed what the Jacobs Chicago office does and had photos of recent projects, including examples of streetscapes, bike lanes, and airport runway contracts all within the city of Chicago.

Next up was Power, the construction mentor firm on Team 7. They walked the students through a breakfast scheduling activity to  show a simple example of scheduling, and how certain activities can overlap (toasting bread and making coffee) but others cannot (showering and getting dressed). 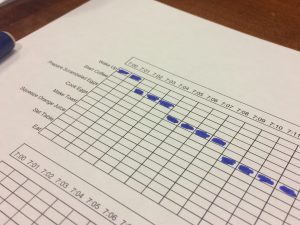 The scheduling activity used common tasks people do as part of their morning routine.

Last up was Adrian Smith + Gordon Gill, the architecture mentor firm. Several mentors walked the group through recent projects, including one in China and one in Kazakhstan. They also had some VR headsets loaded up with 360 degree views of their proposed projects (these were super cool!). And they had an Oculus Rift virtual reality system where students took turns “walking” through proposed apartments. 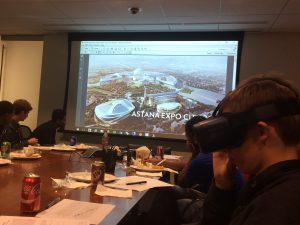 Students tried out the VR headsets during the presentation. 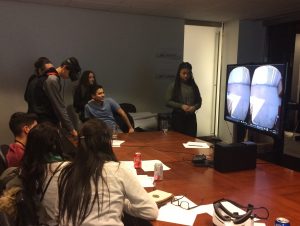 Students also got to test out ASGGs Oculus Rift system and walk through virtual apartments.

Week 4: We will be doing our site visit!! The meeting location will be Lou Malnati’s at 1120 N State St. It’s a short walk from the Clark/Division red line. Please bring your signed permission slip!