Week 2 kicked off the series of weeks where the mentors share more details of their various career paths, and the students learn more and more about what the mentors do on their day-to-day jobs. We did two activities following dinner.

The first activity was a “murder mystery” game. Three mentors, one each from the 3 disciplines of ACE, were considered suspects. The students were divided into small groups, and the goal of the game was to figure out which suspect was which profession by asking certain questions and considering a few pieces of “evidence” (clues). The students asked the 3 suspects hypothetical questions like: 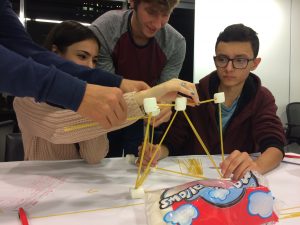 The second activity was a spaghetti marshmallow tower competition. In the same small groups, the students were challenged to build the tallest stable tower given one box of spaghetti and one bag of marshmallows. One team won the initial height competition, prior to an “earthquake” hitting. Not all towers survived the earthquake though! 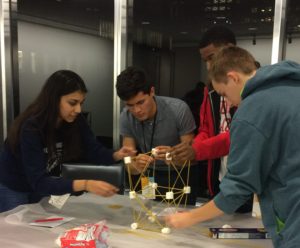