To catch you up on weeks 5 and 6: Week 5 was college night, and the mentors shared their experiences with college, what types of degrees are best for the different professions, and their personal life paths via collages. Week 6 was a relaxed week since a lot of the students had exams. We watched an episode from a TV series that followed the rebuilding of New York’s World Trade Center building, and this particular episode (#5) was focused on the new transportation hub designed by famous architect Santiago Calatrava.

Week 7 started with a review of last year’s project. We wanted to share with the students the presentation from last year so they have a sense of what all we’ll be learning about and presenting. After going through some specifics of each discipline, we moved on to an activity.

The activity we did this week is one of the favorites among Team 7 mentors and alumni and mimics a lot of situations that occur in the construction industry.

We broke up into teams and received our (detailed) instructions. We were to build a house of sorts, that could fit a 4″x4″x4″ cube inside, with at least one solid wall and a solid roof. Materials were limited to typical household supplies, and they all cost something. We had a budget to work with and had to factor in the purchasing of bulk supplies. For instance, if a team decided they needed 4 skewers, the first one was $10, but then the next 3 were each $5, which mimics a common scheme in material procurement in the real world. 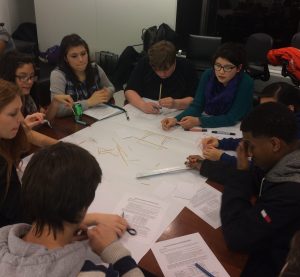 Teams had a few minutes to decide exactly what materials they think they needed, knowing this was there only time to place an order. As the designing and building got underway, a few other hurdles were thrown into the mix. At one point the “owner” decided they didn’t want a solid roof anymore, but instead wanted a small sky light. A few minutes later, there was a labor strike, and only females were allowed to use the tape.

We had a lot of fun building, and learning more about procurement of materials and construction budgeting and scheduling! Next week we will be discussing several options for our Team 7 project! 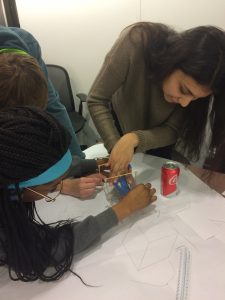